With the rich Dutch history of sailing and exploring the mysteries of sea, Amsterdam Sail is a nautical event which continues the tradition of bringing the love for sea in the heart of Amsterdam. The successful event attracts thousands of sailing ships, from all around the world, together with 2 millions sail passionate spectators. 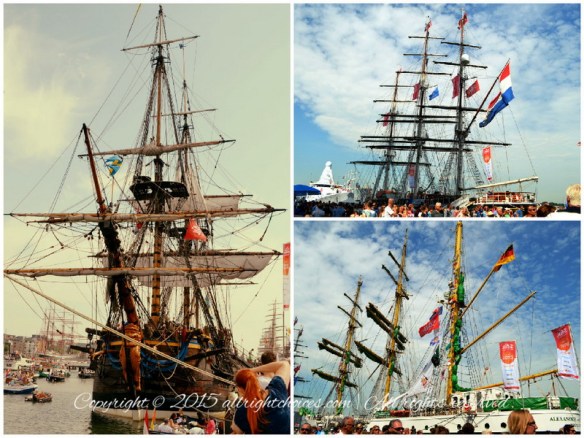 Taking place for the first time in 1975, on the occasion of the 700 anniversary of Amsterdam city, Amsterdam Sail was organized every 5 years, ever since. 2015 is no exception when it comes to keeping the tradition alive.

Becoming the largest public event in the world, with over 2 million people visiting the ships in only a few days, the area is not accessible by car, so the entire vicinity of the event is closed to vehicles, in order to facilitate the access of visitors.

The main attractions are definitely the tall sailing ships, both replicas and heritage ships, which gently make their way to the Ij Lake, located behind Amsterdam Centraal Station. The ships parade is probably the most beautiful sight, as you can see the ships in action, and not only stopped in the harbor.

You can board the ships taking part in the event and visit them. With the large number of curious visitors, the lines are enormous and making it on the ships takes a very long time. However, in the end, it’s worth it! Meeting the crew is obviously the best part, as they can proudly give you more information on the well kept secrets of their amazing ships. I felt honored to have such a unique opportunity!

Part of the attraction also becomes the traffic on the water canals of Amsterdam, which slowly get packed with smaller boats, full of enthusiastic people, visiting the tall ships by water. Amazingly enough, it works perfectly, and between large ferries, tall ships and small ships, the smaller boats safely make their way to the destination.

Sail Amsterdam is definitely a beautiful way of celebrating Amsterdam’s anniversary, a wonderful tradition kept alive by the enthusiasm of amazingly passionate people. Looking forward to see the ships return, in 2020 🙂