During the communist era, the idolatrization of the leader wasn’t an option, but a must. And the more important the leader, the bigger the impact on the surroundings, as monuments and buildings were designed as a constant reminder of his power and greatness.

As Romania had its share of communist regime (1947-1989), the Palace of Parliament (People’s House) in Bucharest, Romania, is just another example of a building designed for this purpose.

Known as Nicolae Ceaușescu’s dream construction, the project started with wiping out a large section of the central city. Have you ever heard of the expression: “moving mountains“? Most likely it was invented during that time, as large amounts of soil were moved, in order to create an artificial hill, for the building to sit on. 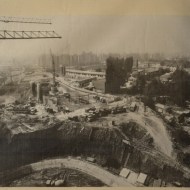 More than 700 architects and over 20,000 workers were at the location, 24 hours a day, for five years, in order to bring the project to life. Unfortunately, for Ceaușescu, he didn’t get to see his dream come true, as he was assassinated before the People’s House was finished.

Absolutely enormous construction which had swallowed tens of billions of lei, while many Romanians experienced a period of severe privations. One impressive investment is the glass ceiling of the ballroom, which can open to allow a helicopter to land inside the building! Probably this is the reason why, the building wasn’t very popular among citizens, at the beginning.

Still not impressed? Wait until you read the following.

The Building is 9 stories high (with 9 underground floors – 92 m – the legend says Ceaușescu used the underground tunnels as an escape path – other legends say he’s still living in the underground nuclear bunker) and has 1000 rooms: 440 offices, over 30 ballrooms, 4 restaurants, 3 libraries, 2 underground parking and a concert hall. Just to give you a more precise idea of the size of the People’s House, all the walking I did in the building, through the years, when I took friends and colleagues from abroad to the Palace for a tour, and I saw only 5% of the entire construction. And still, after you’re done with the tour … your feet hurt.

Interesting enough, in the 1980s, when lit, the building consumed a day’s electricity supply for the whole of Bucharest in only 4 hours!

Also, something we don’t do anymore nowadays, all the materials used to build the Palace were obtained domestically: marble, glass, wood, crystal, all coming from the Romanian mountains and forests. The crystals were used for the 480 crystal chandeliers found in the palace, the rooms are decorated with gold, and only the carpet covering the floor of Union Hall weighs 14 tonnes! 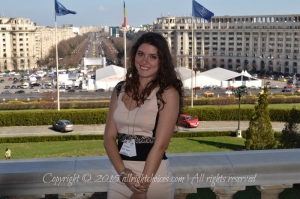 The balcony from the image has a very funny story behind it. As the entire region was redesigned to fit the monstrosity (Ceausescu made sure that the street leading right up to the palace was constructed to be exactly 1 meter wider than the Champs Elysees in Paris – sorry France!), so were the apartment buildings surrounding the Palace, which are designed to amplify the sound coming from the balcony from which Ceaușescu planned to talked to the people. Because he never got the chance to use it, Michael Jackson is the only person who ever got the chance to speak to the Romanians from that balcony, during the famous embarrassing moment when he yelled: ‘Hello, Budapest!‘ … (now, teleportation escalated quickly, as Budapest is all the way into Hungary, far far away 🙂 ).

View over Bucharest, from the top floor of the Palace of Parliament

Nowadays the construction is a multi-purpose building, containing both chambers of the Romanian Parliament. Most of the income comes from renting the ballrooms out for special events. Unfortunately, the cost of maintenance is so high, that the Palace barely manages to pay the staff and electricity, water and gas bills. Also, the largest part of the building is permanently empty, as it has no particular use. Still, the Palace of Parliament remains an impressive reminder of the past era.